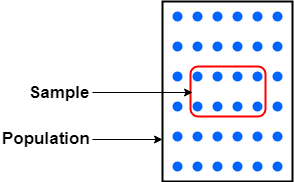 You must have seen how before elections, analytics companies choose few people and ask them which political party they are going to vote for and on the basis of that they predict which party is going to win the election. In this case, these few people are a sample of the entire population who are going to cast their vote.

You must be thinking, how is it possible to predict the behavior of the entire population on the basis of just a few people, who are not even 1% of the total population sometimes. So, let us introduce the concept of representativeness here.

This sample collection is done randomly. You just pick some people from voter list at random without giving any thought or any logic. The rationale behind this sample being representative is that it was selected randomly so there should not be any bias in the sample; therefore, it should have the same characteristics as that of the population. And, if the sample has some bias, then it was not collected randomly. In the below picture, red circle dots are selected at random and form a random sample. 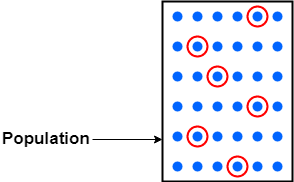 Here, you apply a little bit of logic before picking data randomly. You divide the population into groups(strata) on the basis of an important factor and then inside each group(stratum), you collect a sample by random sampling. This ensures that group should be representative of the population at least upto an extent because you are collecting data from each group.

Example- If in voter list there are 51% males and 49% females, you will divide the population into two such groups, and if you have to pick 1000 data points, you will pick 510 males and 490 females randomly. 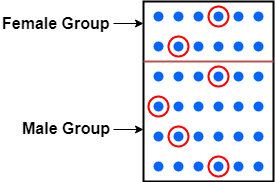 Here you follow a pattern to pick sample data points. For example – you decide that from 50000 people voters list, you will pick every 50th person to get 1000 data sample. 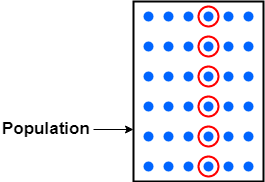 Entire statistics is based on one thing and its called random variable. A Random variable is a variable whose actual value can only be determined after the associated event happens. Before the event, you can only tell its value with some possibility, but not with 100% certainty.

Another example – Let's say that 50,000 people are going to cast their votes in one constituency for an upcoming election. Some will vote for Party A, and others will not. But, how many people will vote for party A is a random variable. You don’t know that till the election result is out. But, by taking a representative sample of people and asking them which party they are going to vote for, you can get some idea about the election result.

Probability is the chance that some event will take place; or in other words, the likelihood of an event happening. Mathematically, it can be calculated as

Example: Let's say we have a basket and there are 4 red balls and 6 blue balls. What are the chances that if a ball is randomly picked from the basket, it will be a red color ball?

Here winning value of the lottery ticket is a random variable.

Assuming all lottery tickets have equal chances of winning, there are two possible winning values of this random variable: 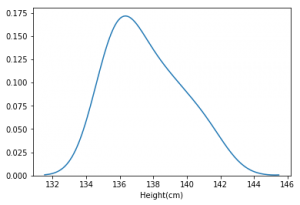 If you can have a function y = f(x) to represent this graph, then this function is called Probability Distribution/Density Function. These functions can be of two types :

Mean of a binomial distribution = np 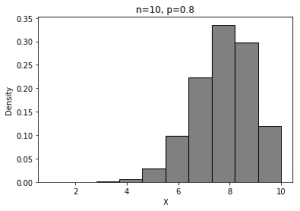 This problem can be solved using the formula given above, but we will be using python package scipy.stats to solve inferential statistics problems. In this problem, if the number of absent students is more than 2, the teacher will not teach the class.

There are two approaches to solve the problem

In this distribution, a random variable can have more than 2 outcomes. It talks about the number of occurrences of an event in some time period. 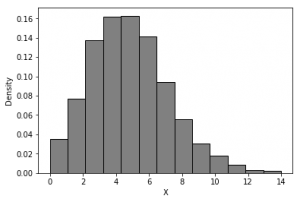 Example: Generally, 12 accidents happen on an average in a day in a city. The number of available ambulances can handle cases upto 15 accident cases. What is the probability that cases can go above 15, and extra ambulances need to be deployed?